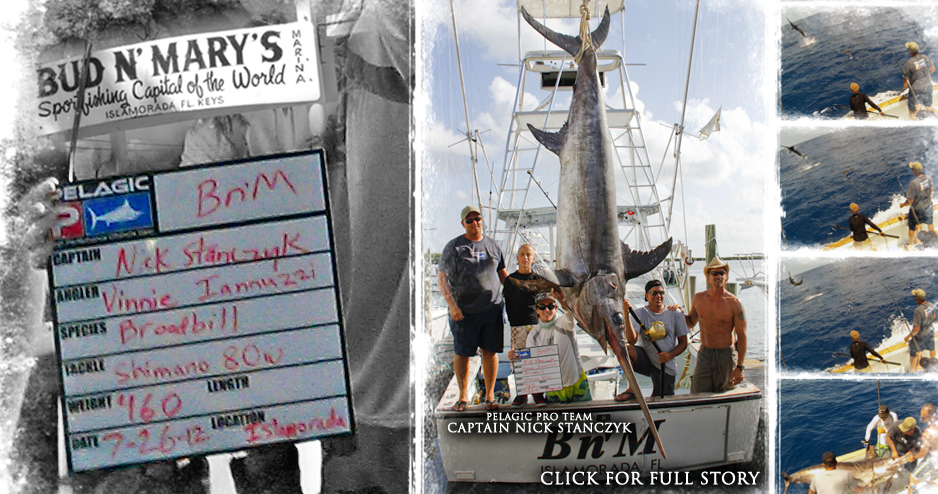 "We fished on July 26th, 2012, on the B n'M.  We got to the swordfish grounds and didn't have a bite the first drift.  A few boats were catching some nice size mahi around us and Vinnie asked if we should skip the swordfishing and catch some mahi - I told him just to have a little patience.  We had only been fishing for an hour, and sure enough the next drop we got tight and Rocco caught his first ever swordfish, going about 80 lbs.  Vinnie again asked if we should try for some mahi since we got lucky and caught a sword.  We had a couple small bites the next few drifts but we just couldn't keep the hooks in them.  We decided to make one last drop and before the bait hit the bottom we were hooked up.  The fish was racing to the surface. Vinnie got in the chair and 10 minutes later we saw a splash way in front of us.  I told Rocco it was probably a porpoise jumping, but about 2 seconds later I see a giant sword jump 10 feet in the air.  It was a giant broadbill! 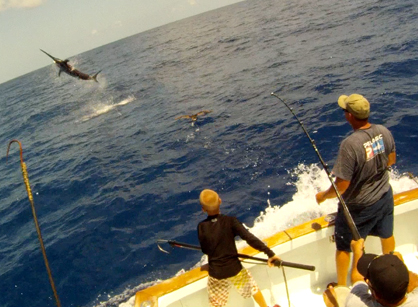 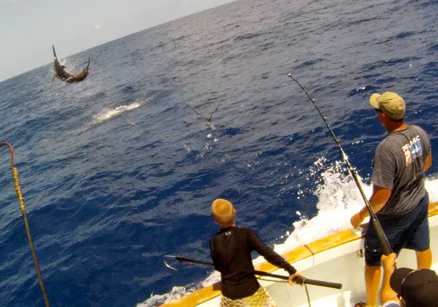 "We eventually come tight on him reeling in over 1000' of line and the fight is on. The fish made 5 of the most spectacular jumps I've ever seen.  The fish never went deeper than 500' after she breached the surface and I believe the jumps tired her out.  After a 90-minute battle we sank the gaffs into one of the largest swordfish ever caught on rod and reel in the Florida Keys, and the biggest at Bud N Mary's Marina to date - the great fish weighed in at 460 lbs.  Needless to say I didn't hear anything else about catching a mahi on the way home."